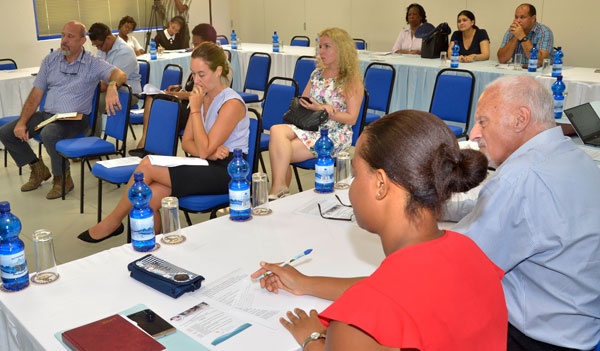 The Sir James Mancham International Centre for Peace Studies and Diplomacy organised its first forum on core diplomatic challenges for Seychelles and the region. The forum was held on Wednesday 22nd March 2017 at the University of Seychelles under the theme “Think big, but small is beautiful: small island diplomacy”. The forum discussed the core principles of Seychelles foreign policy and it saw the participation of professionals, academics and students from several key sectors namely the Department of Foreign Affairs, Contact Group on Piracy off the Coast of Somalia, Blue Economy Department, James Michel Foundation, Civil Society Organisation and the University of Seychelles.

The Seychelles has a track record of successful small state foreign policy and as such stands as exemplar for what such countries can achieve. The goal of the forum was to reflect on these achievements and to outline the core challenges and strategies that follow.  The starting point for the panel was the observation that the majority of the world’s nations are small states. Contrary to the conventional belief that it is predominantly the grand powers that set the agendas of world politics, a wide range of studies shows how small states exert influence and shape international policy making. They act as facilitators and honest brokers in multilateral decision making. They act as norm entrepreneurs and issue advocates and succeed in shaping the international agenda.

How has the Seychelles fulfilled such roles? As the first speaker Ambassador Barry Faure, Secretary of State for Foreign Affairs highlighted, the Seychelles has been successful in pursuing a foreign policy which is in dialogue with Africa, Asia, the Arab World, the Indian Ocean region, but also former colonial powers. Seychelles has spearheaded the international campaign for the blue economy, and in forming an alliance with other small island states ensured that the UN Sustainable Development Goals include a dedicated goal for the group. In chairing a major international organisation, the Contact Group on Piracy off the Coast of Somalia, the Seychelles has further enhanced its international leadership profile.

Reflecting on these success stories, he outlined the diplomatic techniques required to pursue small state diplomacy. He argued that the low capacity of the country can be overcome through prioritizing issues in particular in multilateral policy making. Teamwork and information sharing among small states allows to increase capacity and develop a stronger international voice. Activism and a pragmatic problem solving orientation are further core techniques. Ambassador Faure also emphasised the importance of regulatory diplomacy that is directed at developing rules for global governance, which have the power to bind also larger states. He ended in stressing the importance of the maritime, economic and environmental dimensions of Seychellois diplomacy. The goal of Seychelles is and will be a responsible partner for the international community.

Picking up from where Ambassador Faure left, Dr. Christian Bueger, Reader in International Relations at Cardiff University, stressed the importance of the Seychelles also becoming a knowledge partner for the international community. Reflecting on the academic literature on small states in International Relations he stressed the importance of continuing to challenge worldviews which are based on realism which suggest that great powers make world politics. He argued that it is important to highlight regionalism, the role of international organizations, and non-governmental organizations and for recognising that capacity is not the sole source of power. Indeed, normative and cognitive sources of power are the core strength of small states.

On this basis he emphasised that the core strengths of the Seychelles in four factors. Firstly, its geostrategic position in the Western Indian Ocean, secondly creole identify which allows to successfully forming bonds with states from other backgrounds and traditions, thirdly the fact that the Seychelles is part of a significant numbers of regional organisations in which they can act as honest knowledge brokers and mediators. Fourthly, he observed that the small capacity of the government can also be seen as a strength, since administrative stove pipes can be avoided, information flow quickly and a true whole of government approach is enabled.

Drawing on this analysis he suggested three particular strategies that the government could further develop. Firstly, to maximize the benefits from creole foreign policy and its capacity to broker and mediate in multi-lateral settings. Secondly, the importance of advancing local expertise in the Seychelles core topics through research and education that would allow the country to become a knowledge partner of the international community. Thirdly, the need to further advance the concept of the blue economy as a bridge between sustainable development and maritime security that foregrounds the needs and human security of coastal communities.

The third speaker, Ms Rebecca Loustau-Lalanne, Principal Secretary of the Blue Economy Department, discussed the role of the blue economy concept in Seychellois diplomacy. Advocating for this concept that allows for framing core developmental and environmental issues differently is a core success story of the country. She reflected on the multi-dimensional character of the Blue economy, which former President James Michel described as a kaleidoscope and provided a range of examples how the concept has changed thinking about sustainable development, marine resources, as well as the management of the oceans.

The last speaker, Mr Raymond St Ange, Special Advisor for Prison to the Minister for Home Affairs and Head of the Contact Group on Piracy off the Coast of Somalia added to the discussion by giving a range of powerful example of what creole foreign policy means in practice. In drawing on the metaphor of Judo, he emphasised how weakness can be turned into a strength. Drawing on a range of examples he highlighted the importance of creole charme, direct communication, informal diplomacy, and accessibility.

The following discussion centred firstly on the question whether the Seychelles can do more to foster a cooperative regional environment and put emphasis on the region rather than the global level. The panel widely agreed on the importance of regionalism and that the Seychelles can take the lead in fostering closer ties to its neighbours in particular in the field of the blue economy. The discussion also concerned how the success of Seychellois diplomacy can be better documented and promoted. Last but not least it is also important to continue reflecting on how Seychellois foreign policy can continue to be innovative and set the agenda in the region and for world politics.